Established as an AVA in 2008, Lehigh Valley wines are showing worthy results with both vinifera and hybrid grapes. While Chambourcin is univesal to most, the fact is Pinot Noir, Riesling and Gruener Veltliner show great potential.

While much of our thoughts of American wine take us to sunny California and now Oregon and Washington, some of the more adventurous drinkers may now conjure up images of the Finger Lakes, Long Island, Virginia, and even Texas. America's wine scene is nearly infinite in possibilities as well as surprises. Not only does every state now make wine -- many are forming considerable industries.  Pennsylvania is one such state with a budding wine industry which currently can boast five AVAs.  The newly anointed Lehigh Valley AVA is contributing nearly 20% of all Pennsylvania wine.

The Lehigh Valley is located in Eastern Pennsylvania, north of Philadelphia and 75 miles from New York City, and the Atlantic Ocean. Commercial viticulture began there in 1974 with three pioneering wineries: Clover Hill, Vynecrest, and Franklin Hill, all still thriving. In April 2008, Lehigh Valley was granted its own AVA designation encompassing 1,888 square miles (1,208,320 acres).

Currently 230 acres are planted to both Vitis vinifera and hybrid grapes as well as some V. Labrusca , all spread out over the massive AVA, 23rd largest in the United States and including Lehigh, Northampton, Berks, Schuylkill, Carbon, Monroe Counties. Two ridges extending from the Appalachian Mountains form its northern and southern borders, and the Lehigh River runs through the center, west to east, before emptying into the Delaware near Easton.

The Delaware River creates the eastern border acting as a moderating feature, reducing risk of winter kill and permitting V. vinifera to thrive in the region. The warm Atlantic Ocean as well as the Chesapeake Bay to the South serve as further moderating factors.

The Valley is essentially a raised limestone basin with shale (fossil filled sedimentary rock), sandstone, and siltstone soils which are largely free draining,  wicking moisture away from the roots, while maintaining water availability during dry periods. The year-round average temperature is 51oF with large differences between summer and winter temperatures.  It receives 45.17 inches of annual rainfall, fairly evenly spread over the year.

There are plenty of variations created by the varied elevations ranging from 211 to 2180 feet.  This variable terrain and the sheer size of the delineated region call into question local claims that the AVA is linked by sharing a very similar climate.

Like many new wine regions, the Lehigh Valley is still trying to define itself and find its own way. A myriad of varieties are being produced by the 10 wineries that make up the Lehigh Valley producers.  Currently wines from 29 varieties are being labeled from just 230 acres of land. Of course, all of the usual suspects endemic to Pennsylvania winegrowing since early days are present, including cool climate hedges such as Baco Noir, Catawba, Cayuga and Concord.

However, some interesting experimental European cultivar possibilities have found their way into the mix including Dolcetto, Lemberger, Grüner Veltliner, Sangiovese and Zweigelt. Thankfully, it seems as though the Lehigh Valley producers have done a much better job than many other developing regions at selecting appropriate varietals for their climate. The presence of mostly cool climate varietals, (including unexpected twists) and the absence of some notorious hot climate varieties such as Grenache and Mourvedre indicates an uncanny focus.

It will, however, seem odd to many, in light of this experimentation, that the Lehigh Valley producers have decided to hang their collective hat on the variety Chambourcin, which they are seeking to establish as their flagship.  Given the breadth of experimentation with potentially suitable vinifera, the region’s choice of a hybrid grape as its signature cultivar will evoke curiosity and even disappointment in some quarters.

Chambourcin is a hybrid of unknown parents created by Joannes Seyve. It has a high fungal resistance, and is itself one of the parents of Regent, a grape that is gaining traction in both Germany and British Columbia. Chambourcin produces deeply colored wines and is grown around the globe, including, by Appellation America’s last count, 474 wineries in 45 AVAs, though the Northeastern US seems to be its epicenter.  Currently it is cultivated on 36 acres in the Lehigh Valley. 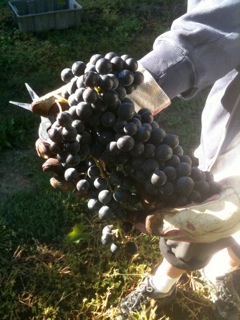 Chambourcin should present no problem for the local market and visitors to the winery, especially considering the focus on "eat local; drink local" of current vogue.  But to make the region viable on a national level, either in hopes to expand sales and production or simply to gain visibility and acceptance among established critics and magazines, banding together behind a hybrid seems like wine marketing suicide.

I cannot help but suspect that Chambourcin may have been nominated merely as a safe and easy option to grow, with reliable and generous yields and easily vinified, but resulting in simple wines without particular merit and distinction.  If so, the Lehigh Valley has signed up for significant marketing challenges in establishing its reputation in the mainstream press as a developing region alongside New York’s Finger Lakes, Ontario’s Niagara Bench and other nearby regions which have earned their stripes principally through vinifera.
On the other hand, if Chambourcin really is the region’s best variety and creates truly high class, balanced wines which capture the terroir of the Lehigh Valley, I can only applaud their courage and light a candle.

The coming few years promise the opportunity to watch these pioneers investigate a wealth of experimental directions.  With Riesling and Chardonnay excelling in this cool climate and Cabernet Franc also widely planted, Lehigh Valley seems to be exploring the path blazed by the Finger Lakes, not too much further north. Some might well be tempted to try Pinot Noir. Virginia’s successes point to the possibility that Italian varieties might find an appropriate home in the Lehigh Valley as well. There is a great deal of experimentation happening, and while one must allow room for improvement, Lehigh Valley is on the right track at finding what grapes best showcase their unique provenance.

Wineries have also come a long way. From humble beginnings, the wineries are expanding and becoming decked out with tasting rooms, wine bars, restaurants, and well equipped facilities. Blair Winery, for example, just moved to a new location with a fully loaded cellar.   In short, Lehigh Valley’s infrastructure seems to be in place, and as the proficiency of winemaking increases, there is without doubt a bright future for the region.

Christopher, you have just committed the outrageous sin of wine snobbery. To suggest that Chambourcin can only make wines "without merit and distinction" is to be fully committed to the class warfare of wine snobbery. It is so easy to display bigotry, by simply dismissing a grape with a word, "hybrid", without the due diligence of investigation of its full potential. Sad, sad, sad.