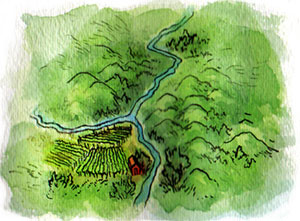 The AVA is marked by the Lehigh River which empties into the Delaware River near Easton. Appalachian mountain ridges denote the region’s northern and southern boundary. The Delaware River is the area’s eastern limit.

The Lowdown
on the New Lehigh Valley AVA

As federal regulators lift a moratorium on new American Viticultural Areas (AVAs), vintners in eastern Pennsylvania are among the first to benefit as occupants of the newly recognized Lehigh Valley appellation.

John Skrip III, who applied for the designation, always knew wines from the Lehigh Valley were distinctive. His father has grown grapes at their home in Breinigsville since the 70s and made wine at Clover Hill Vineyards & Winery since 1985. Joined through the years by other committed growers and vintners, Skrip concluded that the rolling hills along the river valley had the potential to produce unique, quality wines.

But it wasn’t until Skrip and a committee of producers began working on the application four-and-a-half years ago that he realized exactly what made the region special. As he compiled and overlaid maps that denoted underlying geology, frost-free zones, growing degree days and rainfall, John Skrip saw how those characteristics merged in the 1,888-square-mile area. 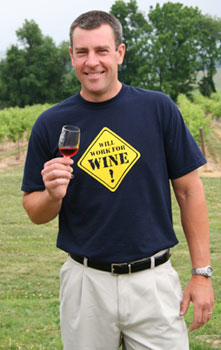 John Skrip III started the petition process with the U.S. TTB to get the Lehigh Valley AVA designation.
“We all felt we were sitting on something special with the soil, the climate, and the way the grapes work,” he said. “The AVA is a good identifier for that.”

When Skrip first suggested the AVA to members of the Lehigh Valley Wine Trail, they enthusiastically approved, formed a work group, and made Skrip point man on the project. The vintners were convinced that wines made from grapes grown in the region were distinctive, but they also wanted to label their wines “estate,” a term federal rules allow only when a winery is in an AVA, even though regulators frequently approve non-AVA “estate” labels.

Most of the wineries in the region are like Vynecrest Winery in Breinigsville. The facility grows the vinifera and French-American hybrid grapes used in the overwhelming majority of their wines on estate vineyards. Native grapes are generally purchased.

“All of us are family-owned and growing what we put in the bottle,” said Vynecrest co-owner Jan Landis. “Having an appellation and identifying ourselves as an estate gives us credibility and legitimacy.”

The Lehigh Valley AVA, home to 9 wineries, 12 vineyards and about 220 acres of vineyards is marked by the Lehigh River which empties into the Delaware River near Easton. Appalachian mountain ridges mark the region’s northern and southern boundary. The Delaware River is the area’s eastern limit. Berks and Schuylkill county lines cut the region off on the west.

The swath of land enjoys a similar climate and well drained, silty soils of broken shale and sandstone. The best performing and most heavily planted varieties include red grapes Chambourcin and Cabernet Franc and whites Vidal and Riesling.

Waiting for the approval was a nail-biter. Officials of the Alcohol and Tobacco Tax and Trade Bureau (TTB) offered unofficial verbal approval, but the application seemed grounded during the raging storm over the approval process. The Lehigh group heard little since the moratorium on AVAs was announced in August of 2007. The furor over AVA applications in hotly contested wine producing regions such as Calistoga and Paso Robles seemed so far removed from bucolic Lehigh Valley. The Lehigh application did not generate a single public comment for or against. The TTB approvals suggest the agency is following paths of least resistance as it green lights Lehigh Valley and the expansion of two relatively non-controversial AVAs – San Francisco Bay and Alexander Valley.

Lehigh Valley wineries are planning a promotional campaign for the appellation. Given the producers’ unanimity and history of cooperation, “Lehigh Valley” will likely take hold more than some other lesser-known, lesser-used Pennsylvania AVA’s. Other than Lake Erie, which extends from Ohio, through Pennsylvania and into New York, appellations are largely absent or ignored in this large, diverse state.

The 765,000-acre Cumberland Valley AVA is shared by Pennsylvania and Maryland, but sparsely planted with grapes. The Lancaster Valley AVA includes 225,000 acres and more than 400 planted acres. Several of the dozen or so wineries there use the AVA, but not widely.

The inherently confusing Indiana County appellation was grandfathered after the AVA law was passed in early 1980s. Today, “Indiana County” is used by one property, the Windgate Vineyards & Winery, whose owner, Daniel Enerson, applied for the designation.

“We wanted distinction, something exclusive, but no one seems to know about it,” he said. Two newer wineries in Indiana County, he said, decline to use it. “I don’t think tourists care, or know about terroir.”

Pennsylvania is a large state with diverse soils and wines, according to John G. Kramb, outgoing president of the Pennsylvania Wine Association, a winegrowers’ group. He supports the introduction of more AVAs in the Keystone State so long as those efforts include promotion and consumer education.

“We are in the trenches, introducing people to wine,” he said. “If we use an AVA on our labels, we have to educate consumers as to why we are doing it and how it makes a difference in what they are drinking. The average consumer doesn’t understand that. We need to make sure our customers do.”