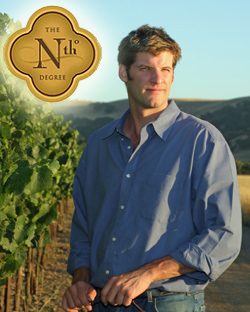 Karl Wente majored in Chemical Engineering at Stanford, thinking it would come in handy for being a winemaker. But it was not until he went to UC Davis that the true winemaker was revealed.

Karl Wente wasn't necessarily planning to continue in his family's wine business, but when his passion for every aspect of winemaking developed there was no stopping him. Now the fifth generation winemaker is expanding Wente Vineyard's horizons.

arl Wente is a mind-altering experience. Tall, athletic, charming, handsome, well-educated, well-bred, and a font of knowledge about winegrowing, Wente makes you feel liked there’s nothing he can’t talk about with great enthusiasm and at great length. Particularly if it concerns vines, wines, barrels, yeasts, irrigation, pruning, vineyard management, wine sales trends, the future of Livermore Valley wine, and music.

Wente is a music fanatic. For him, life is all about the matchless harmony of wine, food and music. His house is filled with a score of musical instruments: guitars, drums of all kinds, a violin, keyboards, and most recently a banjo. With the help of a friend who is a violin virtuoso, Wente is teaching himself to play jazz on his guitar. This discipline, this curiosity, this constant need to learn something new and to delve more deeply into the understanding of what makes things tick, also drives him to new levels of winemaking.

When Karl came back to his hometown of Livermore in 2002, after earning multiple degrees at Stanford and UC Davis, and after a year of bumming around Australia in a tent, he began working in the vineyards. Even though he comes from a family culture entirely immersed in wine and ranching, Wente told me, “I was never pressured into becoming part of the wine business. I tried to keep an open mind, and majored in Chemical Engineering at Stanford, thinking it would come in handy for being a winemaker. When I got to UC Davis, I fell in love with the whole wine culture: the people were so passionate. It became crystal clear that I needed to spend my life in the vineyard: I fell 100 percent in love with growing grapes. It is so complex and beautiful, and made me really appreciate winemaking in a new way.”

His initial winemaking experience at the family winery was for the 2002 harvest. “I challenged my Dad, my Uncle (Phil) and Claude (Bobba, longtime Wente winemaker) to a Chardonnay contest. I wanted to see how our different styles might reflect in the wines. 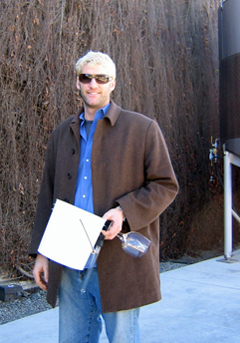 Karl Wente is on his way to work in the winery cellar.


“True to his style, my dad, who the cellar workers all call ‘Big Daddy,’ picked at 22° Brix, pressed it off immediately, let it ferment cold, stirred the lees twice and put it in neutral barrels. Does that sound like Chablis? He loves Chablis. The others chased yeasts. I, on the other hand, chose to go natural. They couldn’t believe I wasn’t inoculating. They thought I was crazy. Sure, natural fermentations can get a little stinky, but my philosophy is ‘Have a little faith. Let it ride!’ You have to manage your fermentations more carefully, and they tend to take longer.

“When I worked at Peter Michael, there was no yeast purchased at the winery. I believe native yeast adds a complexity you can’t achieve in any other way.” He notes that frequent battonage also plays a big role in getting the texture he so desires in Chardonnay: rich and dense, yet never heavy, like a perfect New York cheesecake, complete with graham cracker crust. The 2002 experiment proved Karl had something of a gift, both in the vineyard and in the cellar.

From working in the family’s nearly 3k acres of vineyards, the majority of which are in Livermore, Karl stepped into an official winemaking role, starting with Small Lots, then Nth Degree, and eventually taking over all winemaking for the entire Wente brand. The most exciting enterprise of the bunch, by far, is the Nth Degree project. Karl says that his father Eric, his Aunt Carolyn and his Uncle Phil had been talking about the pre-Prohibition days and how Livermore had taken the first International Gold medal in a wine competition.

“Uncle Phil said let’s see what happens if we take the best blocks in the best vineyards and farm them intensely, to the Nth degree, as it were. Get to know what each vine is doing. 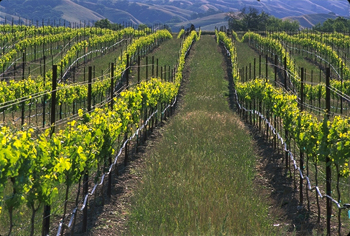 The Wente family vineyards in Livermore Valley are just one of many the winery owns in different AVAs.
Really focus on the flavors. And so I have become a flavor farmer, a tannin farmer. I’m trying to get the purest expressions of flavors out of each block. I’m looking for intensity of flavors and tannins.” This is terroir winemaking on a micro scale. It’s like caring for each vine as if it were a personal pet, or an African violet.

Vines selected to be part of the Nth degree program receive at least fifteen passes per season by vineyard workers, who carefully prune, pull leaves, remove shoots, and thin clusters in an effort to ensure that the grape clusters remaining at harvest are of the highest quality. Each block is handpicked, sorted and brought to the new “micro winery,” which lies in back of the old facility, and feels somewhat like a startup company in makeshift quarters.

A new building will eventually house this all important operation. All the work here (as opposed to in the main winery), is done by hand and Karl oversees every step of the process. He vinifies small lots in thirty one-ton fermenters. In contrast, some of the other Wente wines are processed in 500k gallon tanks. To have two drastically different production lines in the same facility seems odd, but this is certainly not unusual in the world of Big Dog winemaking.

Over a beautifully executed lunch, Karl is quick to point out that the new wine programs are critical to the family’s long-term plan of elevating the reputation, not only of the Wente brand, but of Livermore wines in general. It is apparent that the Wentes, celebrating their 125th anniversary this year, along with the neighboring Concannons, are beyond passionate about their commitment to the unique wines that Livermore alone can produce. If the Nth Degree project could throw down the gauntlet, Karl would be delighted.

"The Nth Degree vintages require careful treatment from vineyard to barrel because the lots are typically quite small and must be kept separate until blending," says Karl. "We make every effort to express the distinctive vineyard and varietal characteristics of each wine." This exacting and unrelenting approach is one that Karl wishes more Livermore winemakers would embrace.

Since 2004, Karl has begun each harvest with the intention of selecting the grapes he thinks will make the finest expression of the varietal. After about a year in the barrel, he decides what makes the premium Nth Degree cut; the rest goes into the Small Lots program.

A critical component of the Nth Degree program is wood, and Karl has been experimenting with barrels from everywhere, sparing no expense. When he came on board, the company was buying from 4 or 5

coopers in two countries. Now, he is buying from 30 coopers in 8 countries. This has increased his spice rack exponentially.

Steven Kent Winery 2006 Cabernet Sauvignon, Clone 191 - Ghielmetti Vineyard Displays cassis, coffee, and mocha notes and has a vibrancy of aromas that is mirrored in the heft and viscosity of its mid-palate.

Go Karl! Take on the G4's. I loved the article and I can hear the passion in your voice from here at my computer. I passed on the piece to everyone involved in our family business so we can continue to take notes from a great wine family.