Nick Nardolillo has had his hands in many roles -- Santa Cruz shredder, an ad agency executive, a school teacher, an intelligence analyst or even, as the winemaker at his own White Crane Winery.

Red wines from the Crane Ridge area, as compared to other areas in Livermore, seem to have more concentrated flavors, longer finishes, deeper color, and a hint of mineral with cassis and fruit forward flavors.
~Nick Nardolillo

Nick Nardolillo has two tasting rooms: one in Livermore and one in Capitola, on the Monterey Bay. He can just as easily look the part of the Santa Cruz shredder, an ad agency executive, a school teacher, an intelligence analyst or even, a winemaker. He cleans up well and is well put-together enough to play all those parts. In fact, he has. From Air Force Intelligence officer in Vietnam, to elementary schoolteacher, Nick Nardolillo has done it all. And he’s far from finished reinventing himself. He’s having way too much fun.

Nick’s family had vineyards in native Italy, near Genoa so he’s been around wine all his life. In fact, like most European kids, Nick has been drinking wine with dinner since he was old enough to sip from a cup. Still, Nick got into winemaking primarily because the B & B property he wanted to buy in Sunol (a rural town adjacent to Livermore) sold before he could make an offer on it. So his realtor showed him a sweet property in Livermore instead: it was ideal for a B & B and just happened to have a vineyard planted.

And not just any vineyard. No, this was the Folkendt Vineyard, made famous by Steven Kent Winery for the fabulous Cabernet Sauvignon which they made from this lofty site on Livermore’s eastern edge. Nick figured he could learn anything and now that he had a vineyard, he might as well have a winery. He jumped in and went to work, producing award-winning wines instantly. In fact, in the 2005 San Francisco Chronicle competition, his White Crane 02 East Ridge Estate Cabernet was a double gold medalist and the 02 West Ridge took Silver.

Nick and I got together recently to catch up on the developing persona of the Livermore Valley winegrowing region, now that he’s had a few years in the wine business.

Laura Ness (LN): What do you think the average wine-aware consumer thinks when they hear “Livermore”? Is it still primarily Wente and Concannon? 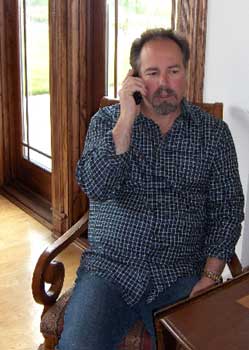 Although that has really been starting to change over the past few years. We had less than 10 wineries up through 1998. We have grown to 38 in the last 9 years. As you are no doubt aware, our boutique wineries have been winning a lot of prestigious awards, both state-wide, and internationally. So the trend is definitely changing in that direction.

LN: What varietals do you think people associate with your appellation?

NN: There was a push for a while to accent Merlot as our area’s varietal of choice, but that has seemed to die out. I really think Petite Sirah has the most potential. Concannon was one of the first to really produce some nice wines from that varietal and there are now at least 5 wineries doing some excellent Petite Sirah as well.

LN: How many acres of vineyards do you personally have planted and to what varieties? Do you plan to add anything, and if so, what?

NN: We have about 10 acres planted on our home estate, and we control another 15 acres on the Lot 2 Ruby Hills estate (on the western edge of the Livermore Valley, near Pleasanton). Right now, we are growing Cabernet Sauvignon, Chardonnay, and Petite Sirah. We are looking at possibly adding some Cabernet Franc.

LN: What drove the decision to plan the varieties you did? Were there any which were not initially successful for you?

NN: We planted Cabernet and Chardonnay for two reasons. We felt like they are the pinstripe suits of wine varietals. They never go out of style. We didn't want to be like a dog chasing his tail, trying to grow the flavor of the month, which seems to be constantly changing. The other reason, of course, is that these varietals do well in our microclimate.

LN: What typical yields do you experience from your estate vineyard?

NN: We keep our estate cropped to between 2.5 and 3 tons per acre; same for the Ruby Hill estate.

LN: From where do you source the additional fruit needed to supplement your estate production?

NN: Other fruit is sourced from premium growers who also keep the vineyards cropped to the 3 ton or less standard. The growers are selected for the varietal which grows best in a specific microclimate. For example, we source our Pinot Noir from Santa Lucia Highlands. Our Zinfandel is from both Livermore and Cienega Valleys. Our Syrah is from both Livermore and the Santa Cruz Mountains. Our Merlot comes from the Crane Ridge area of Livermore, where our estate is located.

LN: Describe the characteristics of the Cabernet Sauvignon from the estate vineyard. How old is the vineyard? What has been the best vintage of this wine that you have produced so far?

NN: Our Cab estate vineyard is now about 14 years old. It would be hard to say what the best vintage has been so far. Our 2002 won a double gold medal at the SF Chronicle Wine Competition, going against the best of world-class Napa Valley. It beat out many Napa wines costing two or three times as much as ours. Last year’s 2003 Cab took silver medals at Orange County, California State Fair and the Indy International, at a very young age. My guess would be that we will win some Golds this year. The 2004 is being released this February, and is tasting as good as its two older brothers were at the same stage. I can also tell you that the 2006 could end up being the best vintage yet. The initial barrel tasting was outstanding.

LN: How would you contrast (or not) Cabernet from your estate with Cab from other Livermore vineyards? Is there a significant resemblance among Cabs in the Crane Ridge area which makes you say: “This is Crane Ridge Cab.” [Note: Crane Ridge is on the southeastern end of the Livermore Valley near Poppy Hills Golf course off Tesla and Greenwood Roads.]

NN: Red wines from the Crane Ridge area, as compared to other areas in Livermore, seem to have more concentrated flavors, longer finishes, deeper color, and a hint of mineral with cassis and fruit forward flavors. Even the Merlots grown here are distinctive in that way.

NN: The elevation of the Ridge goes from around 500 feet at the base to around 1400 feet at the top. We have great water drainage, winds which give the leaves filtered sunlight, rocky soils, and temperatures which bring the fruit to full ripeness.

LN: Is there a personality that is definable as “Livermore Cab”? If so, how would you describe it in contrast to Napa or Paso Robles Cabs?

NN: Compared to a Paso Cabernet, I think ours are a little more full bodied, with darker, richer fruit flavors, especially when I cold soak the fruit before fermentation. Compared to Napa Cabs, ours are actually very similar to some of the Lokoya Cabs (priced at $126 and up) and Rutherford area Cabs. In fact, the Rutherford appellation has a lot of

similarities to the Livermore Valley appellation.

LN: What are the top varieties being planted in Livermore of late?

NN: Cab is still the top variety, followed by Chardonnay and Merlot. We are seeing some Petite Sirah, Zinfandel, Sauvignon Blanc, Viogner, and Cabernet Franc also being planted, though in lesser numbers. And actually, most of them are doing well, especially in the Crane Ridge area.

LN: Is there a wine that your cu

Steven Kent Winery 2006 Merrillie Chardonnay, Unfiltered A wine full of the flavors of apple, pineapple, melon and toasted oak. Aged in a combination of American, French and Hungarian barrels.